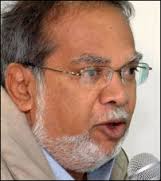 DAP ADUN for Perai and current Deputy Chief Minister II, Professor P.Ramasamy is a known associate of LTTE and a self-acknowledged supporter of separatists and freedom fighters in Sri Lanka.

Professor Ramasamy was appointed by the Liberation Tigers of Tamil Eelam (LTTE) to be one of the members of its Constitutional Affairs Committee in 2003.

Prof P.Ramasamy, the patron of the Penang International Tamil Conference, who is also Deputy Chief Minister (II) of Penang State, said that nobody in India has so consistently supported the cause of the “Eelam Tamils” as Vaiko and that for over 30 years, “Vaiko is the hero of this conference,” Ramasamy declared.

Prof Ramasamy, a Tamil of Indian origin Malaysian, having been close to the LTTE, and as Professor of Political Science at the National University of Malaysia, he was one of the experts who helped the LTTE draft the Interim Constitutional Proposals in 2003. He had also campaigned against Malaysia attending the Commonwealth Summit in Colombo.